Fish and clips: the Utah restaurant where waiters carry guns in their kilts

The first things you notice are the smell of freshly fried cod and the fact that the men serving it up are wearing kilts.

It’s only afterward that you notice the waiters are carrying not just trays of food – but pistols, too.

You’re tempted to ask: “Is that a gun in your sporran or are you just pleased to see me?” Actually, these guys wear their firearms neatly tucked into their waistbands, or in side holsters amid the tartan folds.

Tony Siebers was carrying his loaded 9mm Sky semiautomatic – made in America, he pointed out – in the top of his Black Watch tartan kilt, as he buzzed around the restaurant he owns in Ogden, Utah, getting ready for the Good Friday dinner rush.

“It doesn’t come out unless there is an emergency,” he said, patting the black handle of the pistol. 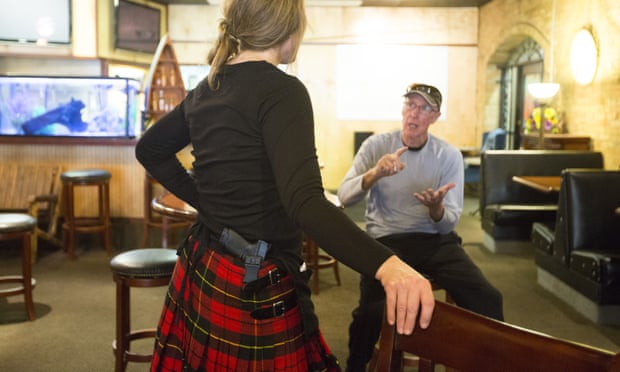 What does he think would be the most likely emergency that would warrant pulling a semi?

“If we were being robbed,” he said. “But it’s never happened.”

He and others in his family, which runs Sea Bears restaurant on a busy street in the small city that lies about 40 minutes north of Salt Lake City, all carry a piece while at work, which is legal in Utah. The kilts are in honor of his Scottish grandmother, who was born in Edinburgh.

Siebers said his wife, Monika, was waiting for her concealed-carry permit last year, in order to be able to keep a gun in her bag, or under clothing, and in the meantime she toted a handgun openly on her hip while at work.

The open carrying has attracted so many positive comments from customers, many curious about buying a gun themselves, Siebers said, that the family decided to make it a thing, adding that they’ve only had a couple of negative comments from people who said it made them uncomfortable.

“Around here it’s not uncommon for people to carry a sidearm. We believe in the second amendment [to the US constitution, involving the right to bear arms]. We’re making a statement to support that,” he said.

“People might think it’s the wild west, but it’s actually very civilized,” he added. “We believe in strict background checks and that when law-abiding citizens carry guns there is less crime.”

Back in the kitchen, Siebers’s twin sons, Collin and Chase, 21, wore revolvers as they popped chunks of battered cod and catfish into the fryer, or bustled to and from the seating area.

“I think it’s awesome,” said customer Todd Einck, 53, a technology entrepreneur, as he watched the armed chef walk by. “It’s part of our American heritage.” 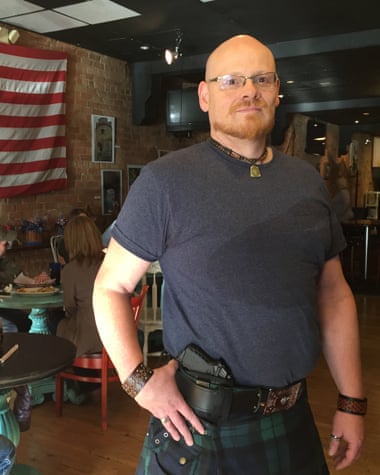 He and his wife Shawna were on a skiing holiday from Arizona.

“I have a concealed-carry permit for my 9mm Glock. I don’t have my weapon on me right now. But a lot of my friends carry guns,” he said.

Three members of the waitstaff were not carrying guns because they were under the legal age to get a license, which is 21.

Nancy Thomas, 56, sat in the middle of the restaurant with her family, bouncing her baby granddaughter on her knee.

She had no safety concerns, despite the proliferation of weapons on the premises.

“It makes me feel safer, actually,” said Thomas, an Ogden local. “I respect this neat family for standing up for their views and anyone troublesome is going to think twice – no, three times – before coming in here.”

Her other granddaughter, Kiera, 4, shrieked: “I like it! It’s cool!” when asked what she thought of the pistol-packing staff.

At the next table, US air force contractor Richard Morrison, 61, said he had a concealed-carry permit.

Was he armed right then?

The establishment doesn’t currently serve alcohol, but Siebers said that was more to attract families with children than from any worry about mixing booze and bullets.

A live band was tuning up in one corner. Some hungry patrons waited to be seated and said they had not been aware that some of the staff were armed.

Brandon Aspittle, 19, a manager in a local chocolate store, wrinkled his nose.

“There’s no point. They’re just making a statement and it feels like they are throwing it in your face. It’s unnecessary,” he said.

Joan Shumway, 47, standing next to him, agreed.

“It’s odd,” she said. She lowered her voice. “Actually, it’s stupid,” she whispered. “This isn’t the time or place. It feels excessive.”

But the whiff of fried food won them over and they took their seats.

Customer Carla Spackman, 58, said she did not own a gun but supported gun rights. 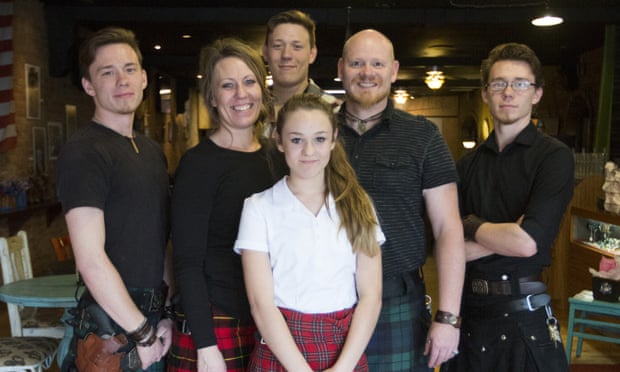 “We live in a scary world and you are going to have to protect your family one day,” she said.

“Terrorism. And I think we’re going to have civil unrest. So much racism, which is silly because America is all about people from different backgrounds,” she said.

Munching on sweet potato fries in a booth at the back, Wendi Bell, 44, a retail inventory specialist, held up her leather handbag.

“It’s a special concealed-carry purse,” she said. She unzipped the discreet, quick-draw end pocket to show a Smith & Wesson handgun inside.

“I love it,” she said. “I’m a Momma Bear with three kids and if anyone threatened us I would not hesitate to use it.”

“Utah is all about guns,” she said.